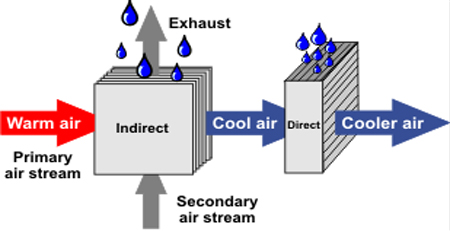 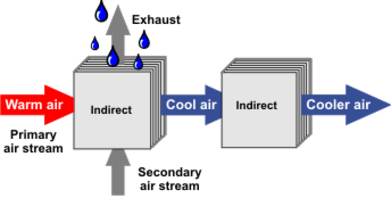 Passive indirect evaporative cooling strategies are rare because this strategy involves an architectural element to act as a heat exchanger (for example a roof). This element can be sprayed with water and cooled through the evaporation of the water on this element. These strategies are rare due to the high use of water, which also introduces the risk of water intrusion and compromising building structure.

In the first stage of a two-stage cooler, warm air is pre-cooled indirectly without adding humidity (by passing inside a heat exchanger that is cooled by evaporation on the outside). In the direct stage, the pre-cooled air passes through a water-soaked pad and picks up humidity as it cools. Since the air supply is pre-cooled in the first stage, less humidity is transferred in the direct stage, to reach the desired cooling temperatures. The result, according to manufacturers, is cooler air with a RH between 50-70%, depending on the climate, compared to a traditional system that produces about 70–80% relative humidity in the conditioned air.

Hybrid. Direct or Indirect cooling has been combined with vapor-compression or absorption air conditioning to increase the overall efficiency and /or to reduce the temperature below the wet-bulb limit.

Traditionally, evaporative cooler pads consist of excelsior (aspen wood fiber) inside a containment net, but more modern materials, such as some plastics and melamine paper, are entering use as cooler-pad media. Modern rigid media, commonly 8″ or 12″ thick, adds more moisture, and thus cools air more than typically much thinner Aspen media. Another material which is sometimes used is corrugated cardboard.

In arid and semi-arid climates, the scarcity of water makes water consumption a concern in cooling system design. From the installed water meters[original research?] 420938 L (111,200 gal) of water were consumed during 2002 for the two passive cooling towers at Zion National Park Visitor Center.[citation needed] However, such concerns are addressed by experts who note that electricity generation usually requires a lot of water, and evaporative coolers use far less electricity, and thus comparable water overall, and cost less overall, compared to chillers.[21]

Allowing direct solar exposure to the media pads increases the evaporation rate. Sunlight may, however, degrade some media, in addition to heating up other elements of the evaporative cooling design. Therefore, shading is advisable in most applications.

Apart from fans used in mechanical evaporative cooling, pumps are the only other piece of mechanical equipment required for the evaporative cooling process in both mechanical and passive applications. Pumps can be used for either recirculating the water to the wet media pad or providing water at very high pressure to a mister system for a passive cooling tower. Pump specifications will vary depending on evaporation rates and media pad area. The Zion National Park Visitor’s center uses a 250 W (1/3 HP) pump.

Exhaust ducts and/or open windows must be used at all times to allow air to continually escape the air conditioned area. Otherwise, pressure develops and the fan/blower in the system is unable to push much air through the media and into the air conditioned area. The evaporative system cannot function without exhausting the continuous supply of air from the air conditioned area to the outside. By optimizing the placement of the ‘cooled air’ inlet, along with the layout of the house passages, related doors and room windows, the system can be used most effectively to direct the cooled air to the required areas. A well designed layout can very effectively scavenge and expel the hot air from desired areas without the need for an above ceiling ducted venting system. Continuous airflow is essential, so the exhaust windows or vents must not restrict the volume and passage of air being introduced by the evaporative cooling machine. One must also be mindful of the outside wind direction, as for example a strong hot southerly wind will slow or restrict the exhausted air from a south facing window. It is always best to have the downwind windows open, while the upwind windows are closed. 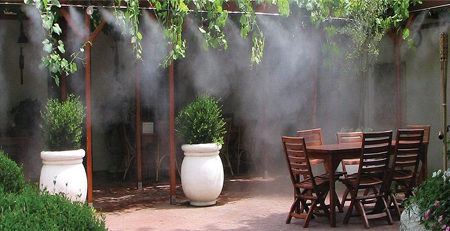 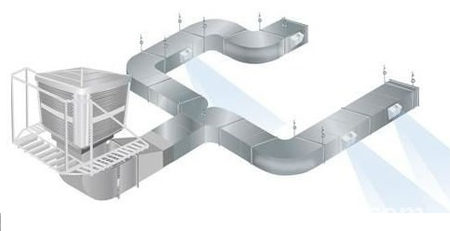 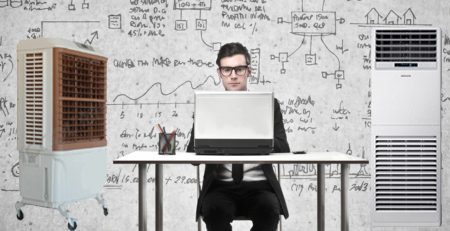